Keeping you in the loop.

On September 23rd, word on the street was that the EB5 Regional Center program was in the Continuing Resolution that passed on September 22nd.

It has been confirmed that the Senate has passed, and the President has signed the continuing resolution extending the program through December 11, 2020.

Word on the street is that the EB5 Regional Center program was in the Continuing Resolution that passed on September 22nd.  Stay tuned...

EPR President, Jeffrey B. Carr, moderated a panel on the future of TEAs at the October 30, 2019, IIUSA Conference in Seattle, WA.

The IIUSA TEA Panel presentation is available by accessing the pdf below. 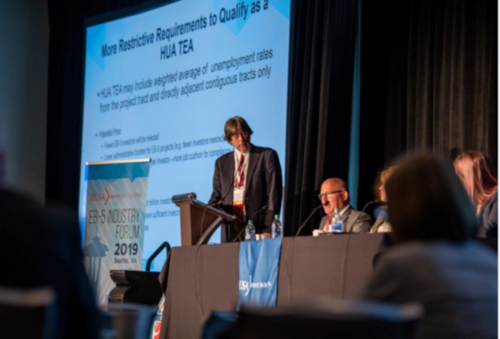 On or about September 27, 2019, President Trump signed H.R. 4378 a short-term continuing spending resolution (CR) funding the government through November 21, 2019. The short-term CR prevents a federal government shutdown and also ensures that the EB-5 Regional Center Programs authorization has been extended through November 21, 2019. This short-term, EB-5 regional center program extension prevented the EB-5 regional center program from losing its authorization to operate on September 30, 2019.  As most all EB-5 stakeholders also now understand, the published DHS EB-5 reform regulations for the EB-5 program (which includes a sizable increase I the program’s minimum investment amounts) are set to go into effect on November 21, 2019, unless a legislative reform package is signed into law prior to that date to pre-empt them.  Stay tuned for more EB-5 Program news updates.

On Wednesday May 7, EPR President Jeff Carr presented EPR’s economic impact/contribution study of EB-5 project capital investment activity under the regional center program during federal fiscal years 2014 and 2015.  Jointly sponsored by the EB-5 Investor Coalition and IIUSA (the EB-5 industry trade association), this was a landmark study which for the first time measured the full economic contribution (including jobs, output and labor income) of the regional center program’s $10.98 billion in EB-5 project capital investment activity from 439 active projects during the two-year study period.  The study found that robust inter-regional supply chains and significant project capital investment activity under the program in all parts of the U.S. resulted in significant and geographically-widespread contributions to U.S. economic activity—including an estimated 355,200 jobs for U.S. workers, more than $55 billion in U.S. output growth, and $23 billion in increased U.S. labor income over the two federal fiscal years. These contributions accounted for 6.6% of the net new private sector jobs created by the entire U.S. economy, an estimated 3.4% of the U.S. economy’s total output growth, and approximately 2% of total labor income gains all relative to the net gains for the U.S. economy as a whole during the study period.  The OMB analyst in charge of the review of the proposed DHS regulations asked good follow-up questions about the study during the meeting, and the conversation on all points reflected a fully-engaged analyst interested in understanding all of the key facts related to the regulatory proposal.  EPR was pleased to present important economic testimony as part of the proceeding reviewing the proposed DHS EB-5 regulations initially published in January of 2017.

Please view the Powerpoint presentation at the pdf below.

EPR has complied a list of valuable resources that benefit our clients. Read through our whitepapers and published articles to learn more about how our services can be of help.

COVID-19 Impact on the Second-Quarter 2021 GDP Estimate: The increase in second quarter GDP reflected the continued economic recovery, reopening of establishments, and continued government response related to the COVID-19 pandemic. In the second quarter,...